The best weaning start. Why you should introduce vegetables first.

In the past (and still today in some countries) recommendations for babies’ primary foods were based on those that were likely to be easily liked and gobbled up such as cereals, baby porridge and apple/pear purées. All of which are super sweet with a taste very close to milk, but weaning should be a whole new experience where the baby discovers “the new”.

At 6 months babies are extra receptive to new flavours and this is why there is a consistent amount of evidence today that weaning introducing vegetables first is an important step in exposing babies to unknown flavours and a variety of textures. In this way, they can develop a liking for vegetables and an acceptance for them in early life. We are born with an innate preference for two flavours: sweet and salty. It happens because these are the two flavours that every human being is exposed to since the womb. Babies “drink” the amniotic fluid which has a salty flavour and then their only food for the first six months of life is sweet breast or formula milk. Instead, we’re also naturally not so keen on sour and bitter flavours. Weaning can be a window of opportunity to start exposing babies to the bitter taste so common amongst vegetables.

Research studies have found that the earlier babies are exposed to vegetables, the more likely they are to accept them during weaning and into later childhood. While babies who don’t eat much fruit and veggies in the first year are less likely to eat a good variety of these at the age of six.

Working on trying to set childrens’ eating habits can be done during weaning, between the ages of 6 to 9 months babies are more receptive to new tastes and can quickly develop a like for even the more bitter of the vegetables. This window of opportunity lasts until around 10 months, at which point they can become much fussier – making it an even greater challenge when it comes to introducing new foods.

That isn’t to say that introducing bitter veggies first is the method that ensures you no fussy toddler at two years old (sometimes it’s unpredictable!). Starting the weaning journey with fruit purée and porridge might be a lost opportunity of teaching your baby to like new flavours, they tend to accept sweet foods either way. How, what and how much?

In the beginning, it is all about the EXPERIENCE, not quantity.
Start introducing a single veggie taste every day for the first 2 weeks varying between bitter and sweeter options.

Bitter and savoury tastes can be a big surprise but don’t be intimidated if your little one pulls a face, this doesn’t mean they don’t like veg, but simply that it is a big new experience. All babies are different, some gobble up new food immediately and some need many tries.

Pick a time of the day when your baby isn’t too hungry and not too tired and give them the time to enjoy the experience (at least 30 minutes). Weaning when you have a busy day can be challenging but it is important that you proceed at your baby’s pace. Read my article about how to wean in a responsive way here.

At six months babies do not yet have developed oral lateral movements so they can’t chew but they can move food from the front to the back of their mouths, and swallow. Try to make a perfectly smooth purée with the texture of double cream. To reach this you can add to the puréed food to some breast milk, formula or boiled water. Gradually increase the thickness of the purée over the first month of weaning. If you are doing baby led weaning instead make sure that the veggies becomes purèe when you squeeze it between your fingers.

During weaning, it is a good choice to offer as much homemade food as possible, especially during the first weeks so that you know exactly what you are feeding your baby. Some brands of baby food are okay to offer once in a while but make sure you read the list of ingredients carefully.

After the first few weeks of providing homemade foods it is going to get the baby more familiar to the tastes of the family’s cooking and allow you even greater  flexibility in what you can offer and you can even soon start to prepare your baby’s food from leftovers of family meals.

I know that preparing different food every day can feel a bit overwhelming so to help you I have prepared a 2-week weaning planner for a veggies-first approach. Here you can notice how I alternate between bitter and more sweet flavours. Your baby needs very small amounts in the beginning but if you are doing traditional spoon-feeding you can prepare some extra purée and freeze it for another day when you can mix with another veggie.

During the first months of weaning, babies still get around 500–600 ml of their usual milk which provides their nutrition. So do not worry about how much solid food they eat. As mentioned before the first stage of weaning it is all about flavour variety and developing motor skills! For some babies, a spoonful or two is often enough at the start.

After offering a variety of single vegetables, start building little meals including proteins such as eggs, legumes or fish, as well as starchy foods such as cooked pasta and potatoes, making sure to progress with the texture following the baby’s pace.

Rememeber: Whichever way you decide to wean your baby is fine with purées, finger foods or both that’s absolutely fine as long as you follow your baby’s lead. Also if you decide to take the more traditional path of baby rice and fruits, that’s also safe to do.

In this e-book you will find a weekly meal plan suitable for your weaning baby and for you, plus 12 recipes and many advices about how to ensure the best nutrition for your family. 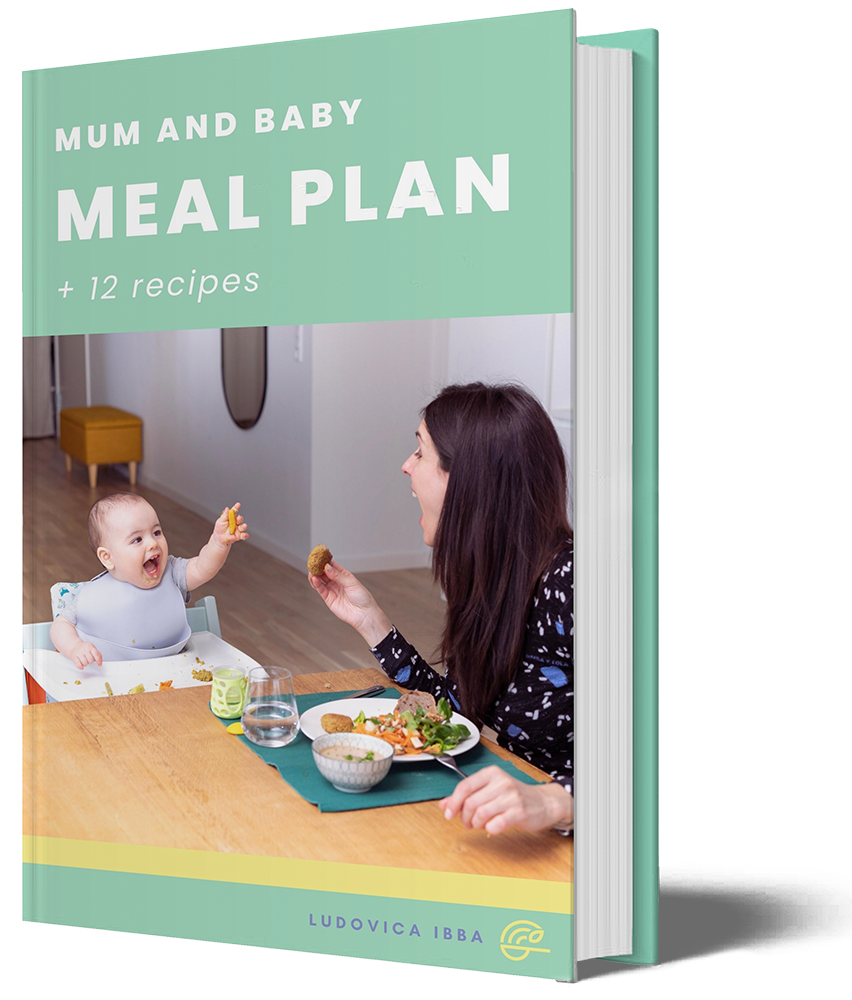